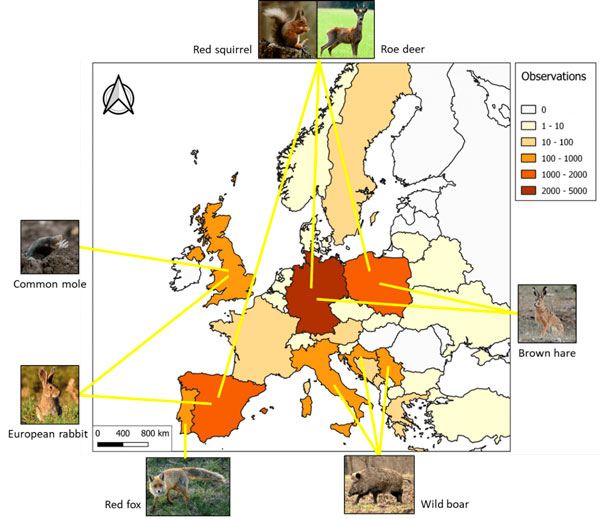 Since the implementation of MammalNet project (www.mammalnet.com) in October 2019 (a project funded by EFSA), participating volunteers have registered observations of European mammal species all over the continent. The project was first stablished in 4 pilot Countries: Croatia, Germany, Poland, and Spain. Now, iMammalia has expanded and initiated its way in other Countries: the Balkans area, where available information on wild mammals’ distribution is scarce, plus Italy. First results are promising, and the expectations is to continue expansion.

MammalNet Project is based on citizen science, which is the participation of the public in scientific research activities, using their effort, knowledge, tools, and resources. Citizens submit the data collected through their own experiences to the researchers, who will combine all the data collected to draw conclusions. The observations can be observed through a web portal and remain available to the scientific community. Finally, the contributions of both citizen and professional scientists allow people to make better evidence-based decisions about wildlife, promoting wildlife conservation, management of wildlife resources and potential risks.

There are three free apps developed to assist with collecting data: iMammalia (smartphone app to record and share sightings of mammals); MammalWeb (web platform for anyone using camera trap, where you can upload and share the photos); and AGOUTI (web platform to support specific projects to estimate abundance and distribution of mammal species, generally developed by professionals, advanced naturalist or trained volunteers who have access to camera trap deployments).

Citizens have registered in iMammalia more than 10,000 observations of European mammal species all over the continent since MammalNet project was implemented. In addition, citizens have collected more than 80,000 sequences of camera-trap images in MammalWeb.

More than 850 citizens have contributed to reach 10,000 observations. The roe deer is the most frequently mammal reported (3224 observations), followed by the brown hare (990), red fox (903), red squirrel (902), European rabbit (493) and wild boar (475). It is also remarkable that observation of species of great conservation interest, such as carnivores (bears, wolves, lynxes, European minks) and alien invasive mammals (e.g., raccoon or coypu) are coming in. 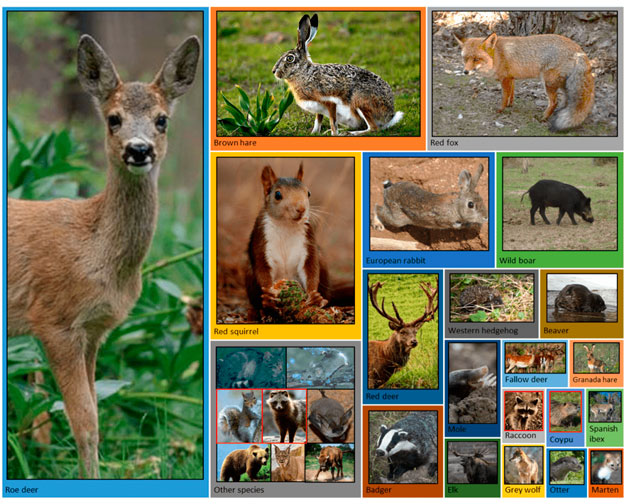 The countries where participants upload more observations in absolute terms are among the 4 initial pilot countries: Germany (4914), Poland (1799) and Spain (1768), (see Figure 1). However, the contribution in terms of new data incorporated international databases reaches the maximum for Croatia, with about 90% of what is reported for mammals in the Global Biodiversity Information Facility (GBIF). This is really promising! We expect the figures to grow during the next months in the Balkans area, where the app has been recently released with local translations.

Figure 2. Top: The most frequently species reported per country. Croatia, Germany, Poland, and Spain are the 4 pilot countries where the project started by the end of 2019. Recently (April 2021) other countries have incorporated to the MammalNet initiative. Bottom: Nº of records per million people (area is proportional to value).

Interestingly, although the lockdown due to COVID-19 pandemics impacted the previously growing trend in the number of records collected per day (mid March 2020, figure 3), iMammalia definitively has rooted among European citizens during 2021, and we currently evidence a very positive growing trend.

Figure 3. Number of records daily collected per day by iMammalia app across Europe. The arrow indicates the first lockdown due to COVID-19 in Europe.

We take the opportunity as we reach this incredible milestone to thank all participants contributing to wildlife mammal research, conservation, and management through MammalNet project, by using iMammalia or any app. We all together are opening previously unsuspected horizons in the fields of wild mammal research and conservation. 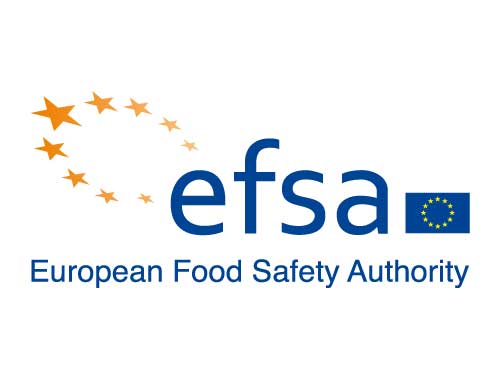